You might laugh at the high retail prices for “premium” cables at big box retail stores. But is it possible that a higher quality cable can give you a better digital signal? The nuance of the answer may surprise you.

Cables might seem like a boring part of your computer or home entertainment equipment. You plug them in, they work. End of story, right?

Again, the nuance may surprise you. To better understand how your cables work, we’ll have to look at the physics and science of how the signals are sent, and the engineering feats that had to be accomplished to create images and sounds.

Even if you think common sense or a little geek knowledge is all you need to get the right cable for your home entertainment system—think again. Here’s some of the most helpful (and coolest) information we’ve found about cables and digital signals.

When you look at the long chain products go through to get to your hands,

sometimes it’s astounding we can get anything manufactured at all.

The cost of a cable, including connectors,

shielding, all parts and labor is surprisingly low (sometimes pennies per foot), even for a quality product.

But the path that product takes to get into your hands adds not just some, but usually the bulk of the cost.

This can include packaging, shipping, advertising and marketing, and enough markup to pay the salaries, bills, and various costs for the retailers that provide that last few feet in getting that product in your hands.

For all the reasons we’ve just outlined,

the pricing on cables is a complicated beast.

A more discerning customer might have a higher price differential, and be willing to pay more for the products they feel are worth it, which can drive up the price both for high quality cables and those cables marketed as high quality cables.

“Feel” is an important word here. Packaging and marketing largely create the feelings consumers have towards a brand name or product sold under that brand.

So what does that mean for a geek looking to buy cables? Buyer beware—high price doesn’t always mean high quality.

Slick packaging and the promise of gold plated connectors might make you feel like you’re getting a great quality product, but in reality, you may only be paying for higher markup for the retailer and clever advertising, gimmicks, and buzzwords.

So what can we learn about cables to protect ourselves from bad purchases?

Let’s take a look at some of the fun stuff and the science of how cables work to try and get a better idea of when buying expensive cables matters.

How Information Is Sent Through Cables

The cables that go to your Blu-Ray player, or Xbox, or PC Monitor are, in effect, not very different from the power cables that all those electronic devices are plugged into.

There’s no special kind of electricity that’s sent through cables—electrons are electrons. They simply serve different purposes: piping data versus piping power for a device, for instance.

You might remember from high school physics diagrams of atoms with the ball-like illustrations of electrons rotating around the nucleus of the atom.

Because of this, many people think of electrons as particles,

and while in some situations that does appear to be true, science has found that many particles like photons (light) and electrons (electricity) show properties of both particles (appearing in similar “sized” and “shaped” packets of energy) and also as waves (interference patterns—think overlapping ripples in a pond).

This property is known as the wave-particle duality, and the important point to take away is that electricity is carried through cables as waves.

One of the properties of waves is that they have a frequency—how quickly they oscillate in a given amount of time. Data is sent by controlling the frequency that travels through the cable.

Crudely put, image or audio data is broken into various wavelengths and channeled through the cables, where they either create an analog signal or carry a digital signal to be interpreted.

What’s the Difference Between Analog and Digital? 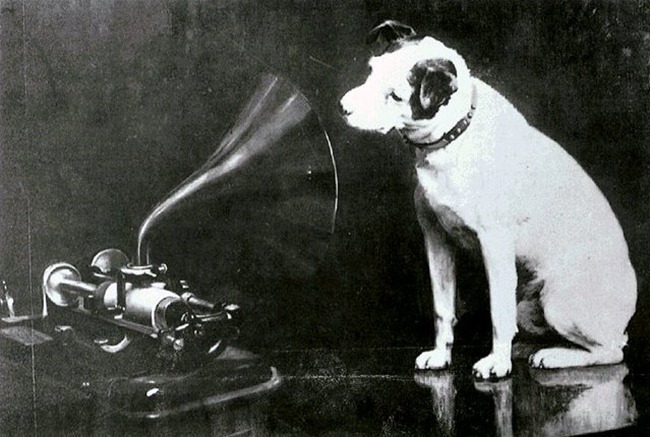 Since you’re on a site dedicated mostly to computer help, you might be rolling your eyes a bit at that sub-headline. But bear with us—this is fun, geeky stuff.

In an entirely analog system, the wave sent through a cable is what causes the sound or image. Depending on how high or low the frequency interacting with the speakers might be, a higher or lower frequency sound could be produced.

It’s similar with analog televisions, except that the signal is broken down into red, green, and blue wavelengths of light to be recombined, creating an image as opposed to a sound.

While the frequency of these waves changes depending on what information is transmitted, the general kind of wave doesn’t really change—

Digital signals operate like you would expect being piped out of computers. They send a series of on and off signals called “binary.”

You might know it as humble ones and zeroes, but the idea is the same. Digital information is coded in these binary signals to be decoded by a second device on the receiving end of the stream.

Like analog images and sound, digital information still has to be carried from point A to point B

through a cable and by electrons.

However, the on-and-off one-or-zero style of data of digital signals transmit don’t end up looking

much like the smooth sine waves we send our analog signals in.

The kind of waveform that a digital signal creates is called a “square wave.” In a platonic world, these are mathematically perfect representations of on and off transmitted by the wave. In the real world… well, let’s just say things end up getting real. 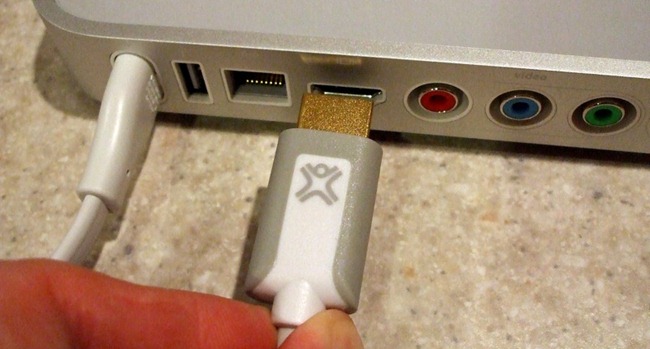 As we said, an analog signal is directly creating sound or images without a layer that is decoding it. Because a digital signal would be nonsense to our eyes and ears,

the inputs on devices like HD television screens have to retranslate into an image or sound from the digital data that is transmitted over the cables.

digital devices have their own software and hardware to reconstitute this data on the input end of the stream.

And because they often don’t get a perfect signal sent through the cable,

these devices have to be good at “guessing” at what the data is supposed to be. 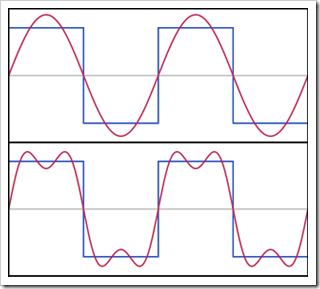 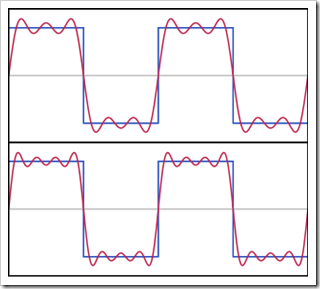 When a signal is sent over a cable, one of the major problems is “impedance,” which deals with the cable (or wire’s) tendency to diffuse or degrade waveforms or resist the current as it flows through the wiring.

As the wire gets longer,

it has a greater tendency to impede the current as it runs through it.

Analog cables had to be well designed to deal with this impedance problem,

as their signal was sent directly to the device without the layer of reconstitution.

Digital signals don’t have precisely the same impedance problem as analog cables for a few reasons relating to what we’ve discussed.

When signals are impeded as they travel through cables,

the waves experience attenuation, or degradation of the waveform.

When the kind of digital signal square wave is sent through a cable,

it becomes attenuated, and is no longer a perfect wave with clearly defined positions of on and off.

Actually, it probably never was, but that’s sort of beside the point.

The decoding hardware and software on the target device knows it is looking for ones and zeroes and has a tolerance for that square wave form.

If it is attenuated to a certain degree,

(or possibly interpolates what the data should have been based on the other data is has on hand).

even through an the wave was impeded through a potentially poor quality cable and likely attenuated.

But does this mean that there’s never a reason to shell out big bucks for a super high quality cable?

TL; DR, I’m Tired of All This Science Crap

Quality analog cables clearly have an advantage over the cheaper, crappier cables,

since the quality of sound or video is a direct function of reducing impedance in the wires and the attenuation of waves sent through them.

But is the same true of digital cables?

Because the likeliness of impedance increases as the length of cable increases,

longer digital cables can impede a signal  the longer it is carried from the source.

poorly made digital cables that are also very long can adversely affect the signal,

resulting in poor quality images that suffer from packet loss,

incorrectly rendered pixels, whole sections of the image, or various other errors like completely blank screens.

So keep your digital cables (particularly HDMI) as short as possible if you’re a cheapskate.

And if you need that long digital cable, be prepared to shell out money for a cable that will accurately carry your image to your monitor or television set from your source.

(better sound or richer images with more color) digital signal apart from the problem of impedance degrading the quality.

Both analog and digital signals can benefit from quality cables,

but rather the two degrade in very different ways.

use the shortest possible digital cable you can, and you’ll probably never have issues

with the quality of your image or digital sound.