Buying a camera has never been more complicated: there are so many good options available,

but picking between them can feel like a nightmare, especially if you’re just starting out with photography.

It’s hard to buy a bad camera, but it’s not always easy to buy the rightcamera for you. Here’s what you should be thinking about.

Digital Single Lens Reflex (DSLR) cameras have been the main “good” camera for the past decade. They’re based off the same design as older film cameras which use a physical mirror inside the camera body to direct light to the viewfinder. Space-wise, it’s pretty inefficient.

In the past couple of years, mirrorless interchangeable lens cameras (normally just called mirrorless cameras) have become a lot better, and more popular.

They use most of the same sensors and components as DSLRs, but with an electronic viewfinder. This means they’re a lot smaller and lighter.

There is a third category,

too: Point-and-Shoot cameras, which were a lot more popular before the rise of smartphones.

If you need something that is better than your phone and as compact as humanly possible, a point-and-shoot may be the right buy—but the money is almost certainly better spent on a DSLR or mirrorless camera in most cases. So, for that reason, we’ll be focusing on DSLRs and mirrorless cameras in this guide.

Right now, deciding between a DSLR and a mirrorless camera is the biggest decision you need to make when buying a new camera.

Although DSLRs are nowhere near obsolete and still have the edge feature-wise, manufacturers are putting a lot of effort into making their mirrorless cameras better.

Here are some things to consider when choosing between DSLR and mirrorless:

Once you can answer these questions, you should be able to narrow the market down a lot by virtue of picking a DSLR or mirrorless camera.

What Manufacturer Should You Buy?

If you’re buying a DSLR, the main two manufacturers are Canon and Nikon. Sony, Olympus and Pentax also make great DSLRs, but they aren’t as popular, so you won’t get third-party lenses and accessories as easily.

If you’re buying a mirrorless camera, on the other hand, then Sony, Fujifilm and Olympus are currently leading the way. Canon and Nikon have been slow to move away from the DSLR market, although Canon’s EOS M5 released just this year has been getting great reviews.

To be honest, the differences between camera manufacturers are tiny. No one manufacturer is clearly the best with the others falling behind. If your photography is so good that the subtle variations in image quality between Canon and Nikon cameras are going to effect the photos you take, you don’t need to read this article!

Again, if you’re already invested in a system, then stick with that manufacturer. If not, then manufacturer isn’t going to help you narrow down your selection too much.

The heart of every digital camera is its sensor, which is what actually takes the pictures. In general, the bigger the sensor, the better the photos, but the more expensive the camera will be. There are two main sensor sizes for DSLRs: 35mm (normally called full frame) and APS-C (crop sensor). Mirrorless cameras come in full frame, APS-C, and Four Thirds, which is smaller again.

If you’re buying your first camera, I’d recommend something with an APS-C sensor. You won’t get a full frame camera for under $1500 secondhand, while you can pick up a decent APS-C DSLR or mirrorless camera for half that price.

For most people, the benefits of full frame just aren’t worth the extra cost. Unless photography is part of your job, you have lots of disposable income, or you know you need the extra image quality and low light performance, you’re better off saving the money to spend on lenses.

Surprise: It doesn’t matter how many megapixels your camera has. I genuinely don’t know what the sensor resolution of my Canon 5D MKIII is—it’s 20-something megapixels. All that matters is that it’s enough.

Once you get past 10 or 12 megapixels, you can shoot pixel perfect magazine covers and billboard ad campaigns. Any camera that’s been released in the last couple of years has more than enough megapixels for most people. 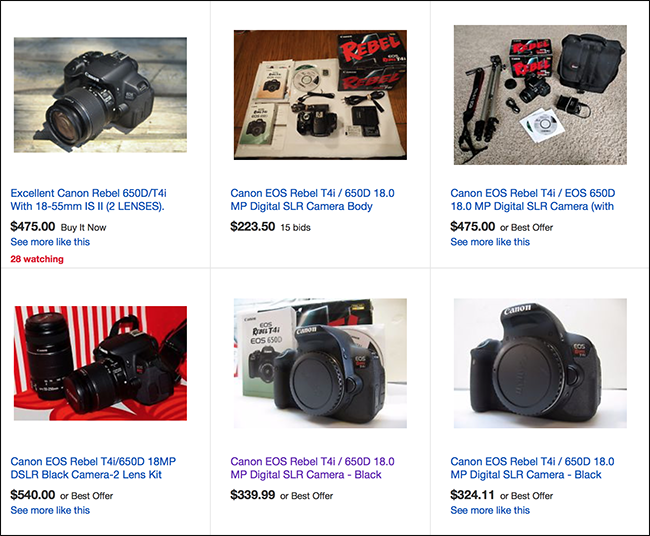 Digital cameras go out of date very slowly. There are plenty of professional photographers shooting with cameras that are six years old and producing stunning work. Newer cameras don’t generally take much better photos, they just work in more extreme situations and have better burst rates, faster and more accurate autofocus, can shoot movies, come with Wi-Fi, and so on.

That means that as long as you’re prepared to lose out on the intense extra features, you can score some very good deals on secondhand cameras. If you’re on a limited budget and want to go full frame, or just want to save some money, it can be a good option.

I still use my five year old Canon 650D (released as the Canon Rebel T4i in the US) from time to time and it’s a great camera. Canon has updated the line twice since then—the current model is the 750D or Rebel T6i—and hasn’t changed that much. The sensor has gone from 18 to 24 megapixels and there are more autofocus points, but the images they make are still really similar. You can pick up a 650D for less than $400 secondhand; I can’t think of a brand new DSLR that’s as good for that price.

So, before you buy, think about whether you really need the stuff a new camera offers. Fast autofocus and Wi-Fi are awesome, but they’re extras. not essentials. Some photographers will need them while others won’t. Do you need a warranty, or are you happy taking a risk on a secondhand camera? If you’ve got the money, it’s obviously better to buy new, but you can get more camera for your money buying used.

Even with the above things in mind, you’ll probably end up overwhelmed by the selection. If you need a good starting point, here are a few good options we recommend. 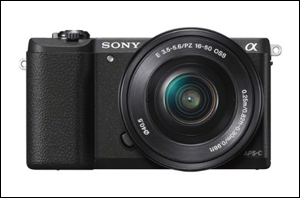 If you’re looking for an entry level DSLR, either the Canon T6i or the Nikon D3400 is a great buy. My preference runs towards the Canon, although our friends at The Wirecutter recommend the Nikon.

For mirrorless cameras, I’d go with either the Sony a5100 (The Wirecutter’s best mirrorless for beginners) or the Olympus OM-D E-M10 II(Wirecutter’s pick for best mid-range mirrorless and highly recommended by DPReview for its bang-for-the-buck). I’ve played with both and much preferred the Olympus; if you’ve got the extra $100 that separate the two, it’s well worth it.

Once you’re going past entry level gear, the prices start to jump, but so does the quality. The Canon 5D Mark IV, Nikon D810, and Sony A7 line are all used by professionals around the world, so if you have the money and want a boost in quality, you can’t go wrong with any of them.

And don’t forget: If you want to buy any of these used, don’t just search for the recommended model—search for its predecessor models, too, which will be almost as good for less money.