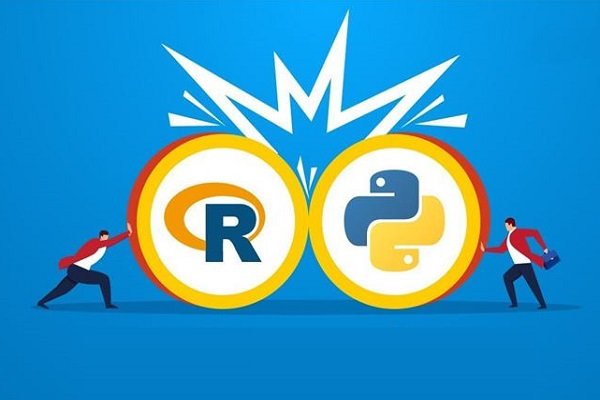 Python, professionals who are interested in working in the field of data science and have the theoretical skills needed to work in this field face a major problem.

are all categorize under a concept call artificial intelligence. But at the heart of all the smart technologies we use is a fundamental element called data.

Without data None of today’s smart technologies are capable of performing their tasks.

That is why data science has become one of the hottest topics in the world of artificial intelligence that has attracted many researchers and programmers.

Due to its appeal and breadth of data science, data science has shaped the workings of a variety of careers, such as data scientist, data engineer, machine learning engineer, data manager, data architect, and data analyst, all of whom are high-income businesses.

When it comes to data analytics,

both Python and R programming languages are offered as simple, free options that have little complexity to install and learn.

If you are a newcomer to the world of data science and have no experience working in either of these languages ​​or have any programming experience in general,

you may be hesitant to choose the right one, so first go to Python or R Or to learn both languages ​​at the same time (which we do not recommend the latter).

Choosing either of these options as a starting point is not a mistake, as both languages ​​provide key skills so you can work with the data properly.

To get to know the capabilities and benefits of each language, let’s first look at the R language and then answer the important question of how to choose the one based on the features of each language.

What are the benefits of R?

Thanks to the various communities available for this programming language, people who use the R language don’t have much trouble because they have good online support.

As a result, newcomers or developers who encounter problems in their projects will be supported by a wide range of language professionals.

In addition to online support,

the language has been widely used by professionals and has provided over 5,000,000 ready-to-use language packs that can be downloaded and used with the R language.

Packages that extend the scope of activities of this language and allow the use of the R language for a variety of tasks (mainly relating to data analysis and data mining).

Programming is the right choice when it is necessary to perform complex and heavy statistical analysis or graphing.

Common math operations such as multiplication of matrices are simple and far from the usual complexities,

for translators to translate mathematics into code for people with no programming background.

Python is a versatile programming language and can do anything. Python can be used for data processing, data engineering, web application development, data gathering, website scraping, data wrangling, and so on.

If you’ve worked with object-oriented programming languages ​​like Java or Cpl Plus in the past,

Python is an object-oriented programming language that allows large,

scalable, maintainable, and powerful code to be write in more easily than R-language.

The Python programming language allows developers to use the prototype they have write on their computer as necessary,

as a source code (a product that is displays as a preview to the customer).

It is true that Python has fewer comprehensive packages for statistical analysis than R-language, but there are still libraries and tools like Pandas, NumPy, Scipy, Scikit-Learn and Seaborn that make Python a good language for data intelligence analysis.

They have become artificial and machine learning. Python has become one of the main choices in machine learning programming, and it does an acceptable job of performing basic and intermediate-level statistical tasks that were previously in the domain of R-language skills.

Which one should we choose? Python or R

​​in relation to data science, it is time to make a comparison between these two languages.

Choosing a programming language at the beginning of the road depends largely on personal interests and personal preferences.

most statisticians and mathematicians choose the R-language to do the job,

while software engineers and computer scientists choose the Python language .

At some universities in the country, software majors also need to write in Java or Python , especially if they are masters of artificial intelligence.

There is a general rule for learning languages. This rule says that if you have learned a programming language correctly,

it is not difficult to continue learning other languages,

as long as the focus is on learning the basics rather than the syntax of a particular language. Learning the syntax and features of a language is the next priority.

In most cases learning a new language, especially in data science, depends on the project you are working on. For example, if you have a server with collected and refined data and your project is centered on data analysis, R is a better choice than Python .

and files or are looking to increase your data skills, Python is the right choice.

How to interact with other team members

Once you have learned the basics of data analytics,

another important factor that will help you learn a new language depends on how you interact with other team members.

At this point you should see what other team members are using the programming language.

If you find that all members of the team use the same programming language,

The job market is the most important factor to consider. For example, your personal interest may be learning the programming language of Cpl Plus in data analysis, but there is not a large labor market available for this combination.

Job opportunities for Python programmers in data analytics have grown dramatically over the past few years compared to the R language.

Figure 1 shows that Python was able to take advantage of job opportunities previously dominated by the R language .

Python’s ecosystem has growing to such an extent that there are a variety of tools and libraries available for almost every processing model to be implement in Python .

Developers can use Python to design and build web applications.

This capability allows developers and companies to hire the forces needed for both data science and web application development teams.

This, of course, also causes problems, as data science professionals may be attracted to teams whose scope is limited to designing web applications, and thus the labor market is facing a shortage of data scientists. 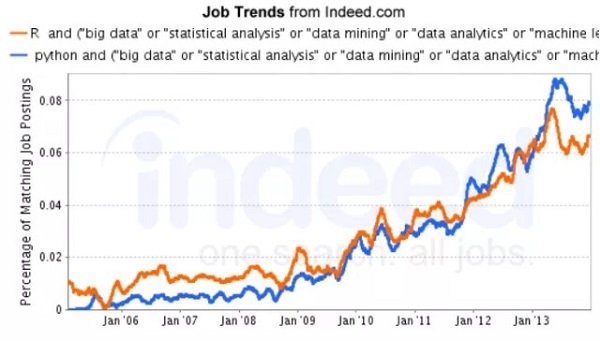 Generally speaking, if you first learn Python or R for data analysis, you have no harm. Each language has its own strengths and weaknesses in different scenarios and for different tasks.

There are also libraries that allow Python to be used with R or vice versa.

Therefore, learning one language does not prevent you from learning another language. But as a general rule of thumb, we suggest going to Python first, as it plays a French wrench in the programming world!

Tags: Which Python or R is better for data science and the marketplace doing better?