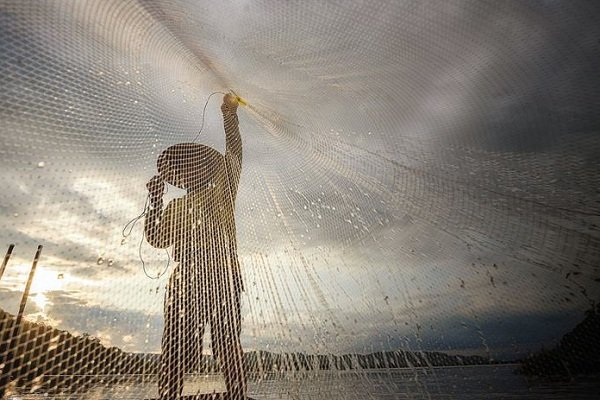 For many people, the term blockchain is reminiscent of digital money and Ramos. But blockchain can have another awesome use. A less talked-about application:

helping set up mesh networks. Using blockchain, ordinary people are encouraged to contribute to the creation of a mesh network by sharing bandwidth and hardware capability and rewarding the nodes that provide the network.
Then more people in the world will be able to benefit from the Internet and its benefits. Several groups are working on such an idea and are trying to provide a practical version of such a network before competitors.

This is one of the articles in the special case of

Why is mesh important?

However, according to the World Economic Forum (WEF) estimate in year 2, more than four billion people worldwide have no access to the Internet. Establishing the infrastructure needed to establish a secure internet connection in less developed countries places a huge cost on operators and inevitably, these costs are passed on to customers.

According to an analysis by Facebook, users who are connected to the mobile network through newly deployed infrastructure will have to pay three times as much as current users to use the service.

As such, the financial constraint is an important obstacle to connecting disadvantaged and underdeveloped areas to the Internet.

Some researchers believe that in order to make public Internet access, we need to reduce the global cost of data usage by an average of 90% to make this public access affordable.

One solution to this challenge is to use mesh networks that can connect existing internet infrastructure to areas without access to the Internet at a reasonable cost.

Although the history of mesh networks goes back to the 1980s,

the use of commercial mesh networks is not long,

and it is possible to cover a large part of the network using mesh technology.

In such a network, without the need for telecommunication towers or satellite communications, mobile or IoT devices can be used as nodes in a network.

The combination of mesh and blockchain

Blockchain and mesh networks have become two attractive topics in the telecommunications industry. Several research groups are working on the idea of ​​combining the two and finding a new solution to access the Internet. Mesh networks allow access to the World Wide Web, especially in disadvantaged areas.

Using blockchain on such networks encourages people to share tokens by sharing their bandwidth and hardware overhead, and this solution, in effect, makes sharing a mesh network profitable for everyone.

An idea that can be refer to as the general term “aggregating network connection infrastructure.”

CMN (Community Mesh Network) is one such idea. CMN is a specific type of wireless mesh network that is usually set up as a Community Network.

An important feature of such a network is the possibility to use it freely, free of charge and without any formal restrictions on the network.

An example of CMN networks is Guifi.net. This network is run by the Guifi.net Foundation and is one of the largest thirty in the world with more than 5,000 routers (Figure 1). Figure 1. Guifi.net is one of the largest CMNs with more than 5,000 routers and a combination of wireless and fiber connections.

In this system, a mechanism call “Compensation System” is attempts to balance the amount of resource sharing and resource consumption. So that the value of supply and consumption of network resources is recorded for each user in a specific region.

and in some way compensate for the balance.

this economic system is traditionally running. One participant stated their usage and the Guifi.net Foundation reviewed the claim, but this could lead to errors and even fraudulent practices.

For this reason, a solution should be place in place to make sure that resource usage is measure fairly. Blockchain is one of the solutions that can be used to address this challenge in P2P networks and make it economically attractive to the participants.

Blockchain is a distribute and unchangeable data storage. The mechanism of most blockchain networks is that users can be part of the network and interact with other members of the network without being recognized,

but in CMN networks such as Gui .net,

and the resources that will be provide to the network.

RightMesh has introduced a software,

platform and protocol based mobile network that utilizes its proprietary blockchain and token technology called Rmesh.

In this distributed network, every Android smartphone or object-based device plays the role of a node, and data exchange is done without the need for internet, using Wi-Fi, Bluetooth and Wi-Fi, which are common features of today’s phones ( Figure 1). figure 2. The adjacent nodes find and connect to each other, and the process is repeated, and data is transferred to the network via Bluetooth, Wi-Fi or Wi-Fi Direct. If a node has access to the Internet, other nodes connected to it will also be able to connect to the Internet or other mesh networks.

Wright is decentralize and P2P, and as a result exchanges on such a network are not dependent on a central interface such as a bank or internet company.

Wright encourages users to share with other members of the network in exchange for tokens,

additional Internet capacity, and hardware resources such as processing power,

storage or even data collected from sensors.

Users and devices connected to the WrightMesh network are uniquely identified with an Ethereum account and can exchange tokens.

Any device on the WrightMesh network can transmit bandwidth to other users.

Users who are going to sell resources are pricing, and ultimately, like any other market, it is supply and demand that determine the final price.

“The United Nations considers Internet access to be a human right,

It is vital that effective and effective solutions are provided so that in situations where formal systems fail, people can still keep in touch with acquaintances and be able to seek help. ”

Getting a stable mesh network based on mobile phones is not an easy task. Since the mobile users and consequently these nodes move continuously, the connections created are not stable and are limited to the Wi-Fi and Bluetooth range of the devices participating in the network.

For this reason, such nodes maintain the connection temporarily. In order to increase the stability of such a network with moving nodes, the main nodes of the network are called Superpeer.

These nodes, which are connected to the Internet, are both involved in network creation and injecting token into the network through Ethereum.

But the use of these nodes contradicts the decentralized method of blockchain. If these particular nodes are not connected to the Internet or other hyperlinks, other nodes cannot be directly connected to them.

Generally speaking, Wright’s framework is heavily dependent on the Internet,

and there are some doubts about the security of the business.

For example, if node A wants to pay node B through a mediated Superpeer, it may be possible for the node to close the communication channel after receiving this payment from node A. In other words, it is possible for a supergroup to steal tokens sent by node A to node B. Centralized superhogs cannot be trusted in such a system, and the security of token exchange must be guaranteed by solutions such as Expiration Time or Hashlock.

A solution to the challenge of moving nodes

The SmartMesh Group is the first group to develop a blockchain-based mesh network,

and then SMT is the only policy project accepts in the list of major digital currency exchanges.

Smartphone protocol is a P2P network protocol and It enables smart tools to be connected without the need for the Internet and to exchange data and virtual value in such a network between devices.

To increase the coverage of this network, a large number of nodes are requiring. The smartphone rewards them with token in exchange for providing infrastructure to users.

With the development and optimization of the Mobile Raiden Network, Smart provides access to the Smart Raiden network.

because the users of these tools are mobile and have no fixed location.

To overcome this problem, the MeshBox project was launch. Meshbox is a hardware box that combines the performance of a home router, storage, content playback, and a number of other functions and works according to the smartphone protocol (Figure 1). Figure 1. Meshbox owners can get token rewards by sharing their hardware on the local mesh network.

and tries to make his node stable and reliable. The meshbox can act as a gateway to a larger Internet network.

With this feature, as long as the meshboxes are connecting to the Internet,

The website claims that the blockchain data sent through this network will be free. Users are rewarded with tokens in exchange for network support and can use these tokens in P2P inter-network transactions.

Blockchain has not fully explained the incentive strategy, wallet and offline payments. On the Blockchain website, users can trade offline with the help of the Riden network, but no details are provided on how to implement this solution. Blockmash has proposed the idea of ​​a dedicated WiFi router (called MeshEX or MESH Extender) that is somewhat similar to Meshbox (Figure 1). Figure 1. Users will be rewarded with BMH tokens in exchange for sharing the MeshEX device on the mesh network.

on a mesh network consisting of cell phones and IoT equipment. Blockchain solutions are still theoretical and have not been put into practice.

In vitro, the block estimates the average range between two MeshEx devices to be 2 kilometers, and if the two devices are in sight, the communication distance reaches 2 kilometers. Obstacles such as buildings affect the board and can be enhanced by connecting the antenna to the device.

and those who have access to it for various reasons are denied it. Internet access is no longer luxury or low priority.

Internet access is so important that it is even recognize as part of human rights. But connecting these billions to the Internet is no easy task. Blockchain may not have been very promising at first,

but now, in addition to its usual applications, as an important solution to encourage ordinary people and

organizations to participate in providing the necessary infrastructure and establishing a large,

Although efforts have not yet reached that cohesion, one can expect a new chapter in networking in the future. Self-governing self-governing networks are managed and managed

1. Community Network is a network that is build with the participation of people and organizations

and through the sharing of resources.

Tags: The role of blockchain in network infrastructure development