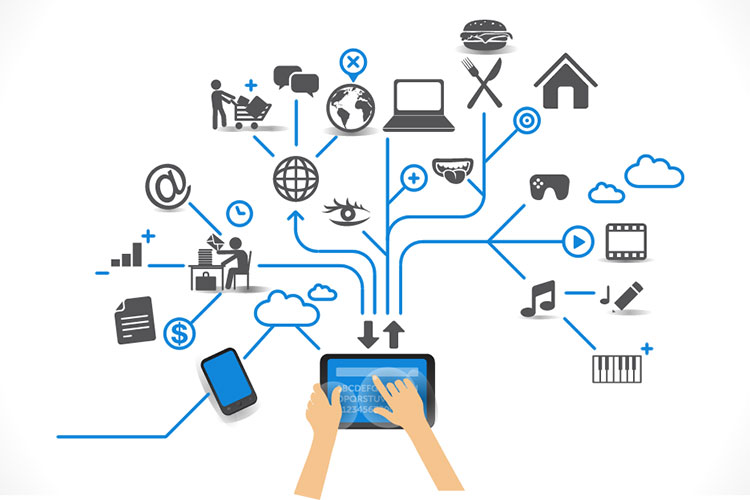 Today’s pioneering technologies combine well and in time to drive the future of the world to a better future.

The four big technologies of the future are getting increasingly serious to the world. The big tech companies in the tech world have invested heavily in the areas of artificial intelligence , blockchain , IoT , and metadata.

However, the growth and development of these technologies has been accompanied by increasing concerns about them.

The combination of the aforementioned pioneering technologies, also known as the Big Four , is the subject of discussion by today’s tech experts.

For example, metadata will be a cornerstone of future technologies, and if combined with artificial intelligence and blockchain, it has great potential. In addition, combining IoT with blockchain is also beneficial for both technologies.

In recent times, the growth and application of blockchain has been declining, but everyone is acknowledging its widespread and comprehensive applications; for this reason, the technology can be useful.

The growth of IoT technology continues, but it has declined for various reasons. One of the reasons was the perception of industry activists on the difficulty of using complex networks of objects. In fact, it was much more difficult to imagine. In addition, security problems and prolonged network deployments have eased the fever around the Internet of Things. The same thing happened with Blockchain.

Due to the similarity of blockchain and Internet of Things in implementation and deployment problems, the combination of these two technologies may help solve their main problems.

In fact, they can work together to eliminate some of the barriers to technology implementation. Consequently, the premise of combining the Internet of Things and Blockchain can be think of as a flawless system in which intelligent objects operate in a network with low human control. It uses the immutable headquarters because blockchain security has been proven to be somewhat inviolable. In addition, the appropriate token system will complete this combination.

There are several ways in which these technologies can be extract together and combine. Currently, these methods are under investigation, but overall, the optimal combination and strongest application have yet to be discovered.

Internet of Things is a difficult technology

In the blockchain space, tokens (ICOs) have emerged rapidly, claiming to solve almost all human problems, one after another. In the field of Internet of Things, such an idea was created a few years ago. Many Internet technology activists saw things in those years as a tool of revolution in all aspects of human life.

However, over the years, hard and valuable IoT experiences have been gained. Experts came to the realization of the importance of network security and technology implementation.

Implementation of IoT networks was at a high failure rate. A field survey found that the success of IoT companies was only 5%. The problems that prevented these companies from succeeding were almost the same as those facing all the new technologies. Data quality and internal expertise and unforeseen time are common for some of these obstacles to evolve.

Internet of Things ideas and technologies on paper seemed promising and comfortable. Today, of course, it has proven to be very complicated to legalize.

In addition, once the technologies are legalize, they also threaten various problems, including security attacks.

One of the most significant examples of Internet of Things security gaps was meet with the Mirai botnet. The cyberattack used IP surveillance cameras and their DVRs to deploy. Of course, victim machines worked on factory defaults or poor security settings.

IoT security issues have been one of the most important discussions of security experts in recent years. Some of them compared these problems to recent events. Emad Labadi ,   The CEO of VeCap , an IoT security company, says of security concerns in the area:

Inadequate large-scale protection is meet in the Internet of Things. Even large industry manufacturers are exposed to many dangerous and simple intrusions. Devices in the security sector can be found in a variety of ways: incomplete encryption and poor authentication requirements such as automatic login and external connectivity.

Just a poorly configured insecure device is enough to infiltrate your entire network or your smart home. In fact, hackers need only one spot to infect the entire network.

Hackers need less than a minute to access smart home devices. Devices ranging from phones and TVs to gaming consoles are all connected to the Internet and are under attack. Many devices with severe vulnerabilities are vulnerable to intrusions that occur before manufacturers understand and provide security updates and spread the word. In fact, short-term thinking destroys long-term security. Labadi goes on to explain the use of blockchain in his company to eliminate security problems. One application is to combine and combine the two technologies.

We use smart contract transactions to secure all internal communications within the smart home system. Every move on our platform is stored on blockchain. The final database is almost secure against intrusion.

The Internet fever of things has subsided somewhat, but its applications are numerous

Sasha Ivanov , CEO and Founder of Waves Platform and Vostok, explains that the growth of the Internet of Things is moving to become more implementable. Of course, expanding will certainly depend on other technologies.

The Internet of Things is moving towards wider implementation and tangible applications. In addition, integrating it with other technologies such as metadata and artificial intelligence and blockchain will increase its impact on our lives and work, and ultimately, a solution will be extracted. The greatest achievements and achievements of the Internet of Things will be achieved at the industrial level. Sensors that collect a great deal of data at this level are used in sectors such as transportation, freight, tracking and industrial processes.

If the Internet of Things and Blockchain are consider standalone technologies, they are limit in their small applications. However, both of these modern achievements will have many uses in combination with each other as well as artificial intelligence. Artificial Intelligence provides algorithms for analyzing the data collected from Internet-connected devices.

Algorithms are using to identify specific patterns. At the same time, blockchain acts as an important layer for verifying data and securing its storage. In my view, if these technologies are used separately, they will not have a particular application. As mention at the beginning of the article, the four great technologies are being develop to serve as the main forces of the Fourth Industrial Revolution. Of course, all of them have reached a stage that they certainly cannot go through alone. For this reason, we are seeing different combinations of the great technologies of the future.

Labadi goes on to point out that IoT and blockchain technologies have all been significantly expanded in the past three years. In addition, the ultimate success of the ecosystem starts with blockchain.

Leading technologies only create the fourth industrial revolution by combining

Blockchain rebuilds the foundations of the Internet. One of the major disadvantages and impediments to artificial intelligence and Internet of Things is the security problems that exist at the current level and form of the Internet. Blockchain technology can eliminate many of these problems with three solutions.

Blockchain allows users to trade directly with each other. This provides users with a payment mechanism at the same time as the communication network. Blockchain networks can be used to generate index-capable reports. This kind of reporting is created on a permanent basis and can be used by all people around the world without censorship.

Another blockchain feature for users is the authentication tool. This will be useful for users who are working to control their data.

Of course, security is an important issue for people like Labadi, and blockchain is the tool that, according to some experts, introduces third-generation security to systems. Forrest Service analyst Dan Biller also has definitions and analysis of the advantages of combining the two technologies:

The uses of the Internet of Things are basically distributing. For this reason, distributed office blockchain technology, or blockchain, plays a key role in how devices interact directly. Having the head office and tracking devices and how they communicate, as well as their current status and operation will be the advantages of this technology mix.

Blockchain was create as a basis for applications that include transaction and communication. Such applications will include items such as smart contracts or other smart applications that support the specific processes of the IoT. In this way, blockchain can not only facilitate the reception and implementation of the Internet of Things, but also increase its capabilities and cost efficiency.

The capacities of combining the two technologies mentions are not only hypothesize, but are examples of them being investigate and even implement. For example, IBM , as one of the major users and actors of blockchain solutions, is already using this technology for some sort of Internet of Things and is even developing it. The ultimate goal of this tech giant is to merge and integrate artificial intelligence and the Internet of Things and Blockchain.

Companies are major users of IoT and blockchain. Like major industry players, they have come to the conclusion that the Fourth Industrial Revolution will never take place on one technology. In other words, we need the fusion of pioneering technologies to make such a revolution. If the Internet of Things is having security and sabotage problems,

combining it with blockchain to make the secure and impermeable headquarters makes sense. Thus, if artificial intelligence is having trouble recording and storing data, the distributed head office will be of great help to it.

It is worth noting that when the Internet of Things

and Artificial Intelligence take advantage of the aforementioned benefits in combination with blockchain, the technology will become even more rooted,

and in some areas it will be necessary to use it. Deploying at this level has been one of the pervasive goals of distributed office technology.

Finally, it may be time for blockchain activists to abandon attempts to break down past systems with just one network. They should look for ways to expand blockchain in alliance with the Internet of Things, Metadata, Artificial Intelligence and other technologies.

Tags: The combination of China's blockchain and the Internet of Things prepares us for the future