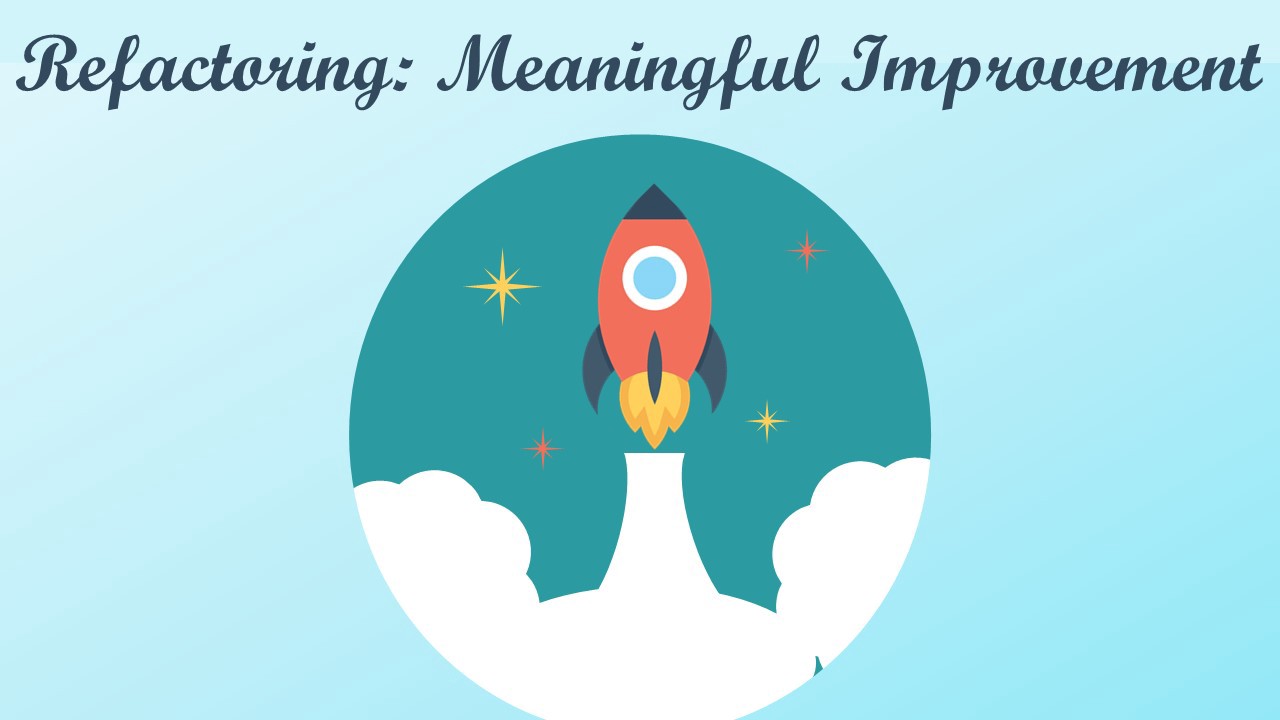 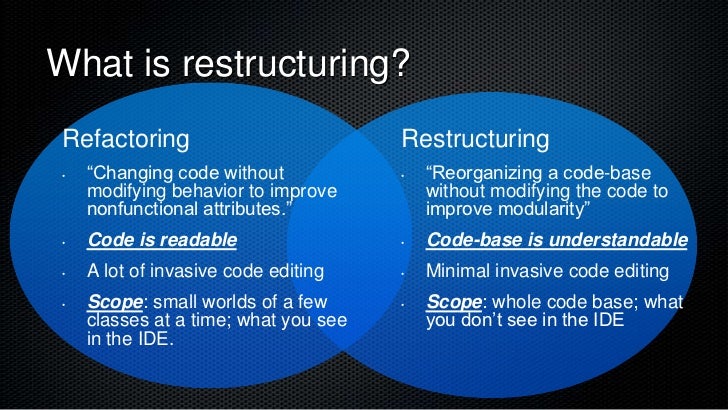 Although in the real world of every business Refactoring compared to Restructuring in software development, many of the concepts are interchangeable, but at least on paper, it’s possible to point out their differences.

In this regard, I intend to express my personal views on the differences between Refactoring and Restructuring in the software development industry.

To better understand this, it may be wrong to attribute these concepts to the automotive industry to make them even more inaccessible!

Familiarity with Refactoring with Restructuring in Automotive

Well, we saw innovations in improving the arrows, so far as I remember, the ultimate creativity was that the headlights and the headlights got bigger,

and after a while, the shaft version came out that did not get much, and today we see that the pride comes as a figure. They add a little to her and name her like Pride,

and I do not know how many or several million they put on her price.

In fact, I can say something like that. Refactoring means that small changes are made but they do not do anything but make a little better than the previous version.

Now, let’s go to a car like Benz, a long-time competitor for investing in security.

In addition to refactoring, in other words, aerodynamicizing the appearance of the car, adding some new options and the like, they also invest in the restructurization of this brand.

(Let’s remark that the letter W is pronounced “and” in the German alphabet,

and since BMW is a German car, it’s better to pronounce it like the Germans, not British, and say it’s dead.

there are a few blind people who think that if they say that they will not be too high-tech!)

Regarding the concept of restructuring in the car, it can be said that the cooling system,

the review of the sucking system, the design of the wiper,

the change in the chassis, the engine deflection to reduce fuel consumption,

and so on, belong to the Restructuring, to some extent Many times,

spare parts for these top-notch cars do not seem to be backwards compatible with Dolopers,

In short, the refactoring of the car involves minor changes that lead to continuous improvement (Kaisan),

but Restructuring refers to changes that both lead to continuous improvement of the car, but at the same time fundamental. 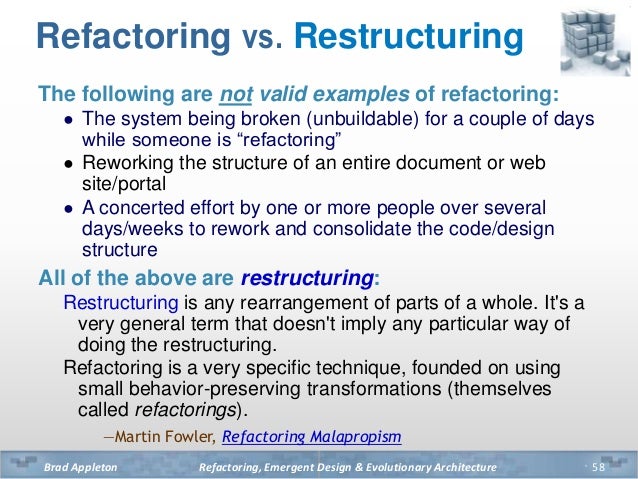 Familiar with Refactoring with Restructuring in Codex

Well, if we want to go quickly, the most important thing is that during coding, even changing the name of a file is also refactoring,

and among other things under the umbrella you can rename variables, methods, classes, how to queue better,

Handel Better choices for eyeglasses and exits, the selection of messaging errors and the like. In short,

a series of measures that will lead to a continuous improvement in quality.

But when it comes to Restructuring, it’s like the same German automakers are going to apply the infrastructure and platform changes in software or applications.

(In the end, we did not understand the software difference with the app)

So, for example, applying the right patterns of designing or implementing SOLID rules, all of us,

as a developer, are forced to break up many of the inefficient,

inappropriate, and inadequate structures and rebuild everything and,

as we know from the name of Restructuring,

and there is no need to explain that this is very costly in the software industry!

For example, in this process,

we sometimes have to change the structure of the database, which I discussed earlier in an experiment in Schema Migration.

(Of course, let’s not forget that here the interchangeability of these two concepts

is not discussed because one dimension can be regarded as the refactoring structure of the database.)

For a better understanding of this topic, before the end of this discussion, I will give a real world example in relation to these two concepts.

Suppose a developer is an online store in which we have a class called the god class, or “master classes”,

(note that the name is Gad g was written not with G, with the interpretation that god means goddess,

the class to several specialized classes so that each class is responsible It’s a special task,

or separating the methods into a few small and complex methods,

in fact, we are turning to the Refactoring project.

Let’s assume that we have been using the RESTful API to communicate between the various modules of this online store so far,

but with the launch of GraphQL’s open source project,

we intend to migrate to this technology, which, of course, will require a series of structural changes. We can say we’re going to restructure.

My personal experience in this area says that when we refactoring, we may erase several hundred additional lines of code, and, for example,

an algorithm that runs on hundreds of lines of code, can be implemented with forty lines,

but when the restructuring comes out, more pain and bleeding We have to suffer because, basically, we will sometimes have to Shift + Delete some modules, plugins or components that we’ve been writing for days!

What is RFC and how it affects the Internet

RFC or Request For Comments is an official drafting by the IETF (Internet Engineering Task Force),

in which the specifications of a particular technology are describe.

When an RFC is adopt, it becomes an official standard for that technology.

RFCs were originally uses for the APPANET protocol

(now calling the Internet) and are then uses in all of the Internet infrastructure technologies.

For example, the SSL protocol I describing earlier, was approve and released under an RFC.

and review by the relevant committees until the latest version is approves. At this time, no comments or changes are accepted.

In practice, if there is a need for change and a protocol change, newer RFCs should be adopted. For example, the FTP protocol in RFC 114 was released in April 1971. Then it changed in RFC 765 in the 1980s and finally in RFC 959.

Tags: Refactoring compared to Restructuring in software development / What is RFC and how it affects the Internet