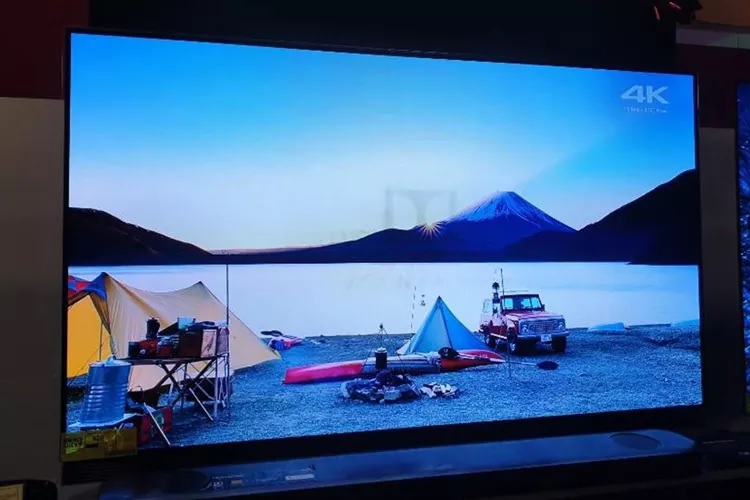 The problem of screen burn-in or image burnout on plasma and LCD TVs can be remedied by fixing photos on the screen.

In some displays, if the image stays on the screen for a few days, the image stays on the screen, and the problem will never resolve automatically. This is called image burn or screen burn. In fact, this problem occurs when some pixels are used more than other pixels and their color differs slightly from that of the other pixels around. In such a situation, the damaged pixels cannot change color.

Why do some screens have image burn problems? Why can’t display makers prevent this from happening in their products?

How can this be resolved? In this article, we intend to answer these three questions in full.

Prior to the advent of liquid crystal flat displays, only CRT televisions and monitors with a cathode ray tube were available. Each of these pixels contains red, green, and blue phosphors, each with its own distinct phosphors depending on the intensity of their phosphors. If the image stays on the TV for a long time, the phosphorus intensity will be significantly reduced, leaving a ghost of the image on the screen, which is called image burn. In a simple explanation of how plasma monitors work, these monitors have a gas-like material with free ion particles, when you do not use them, the particles in the plasma gas become unloaded and do not display any images, but after generating electricity, Ion particles become charged and collide very rapidly and produce light photons. Plasma TVs use phosphorus (just like CRT displays) to convert these photons into images.

Although LCD and LED screens do not suffer from the same type of image burnt as CRT and plasma TVs, they are not immune to this problem. In fact, these TVs have problems with image persistence.

The cause of the image burn phenomenon

Let us first explain the reason for this before discussing how to fix the image burn problem. Although the intensity of this problem in LCD and LED TVs is not as severe as in plasma and CRT TVs, it has a permanent effect on any kind of display if the image remains long.

Let’s first explain the cause of this problem on plasma TVs, but before you know how this happens on CRT TVs, as we said before, the phosphor elements of each pixel lose their brightness when left on the screen for a long time. they give. In cases where the intensity of the image burns is high, the ghost of the image remains on the screen and will not disappear.

Plasma TVs also contain phosphorus elements and may be harmful to these televisions. The image burn phenomenon occurs on plasma displays when pixels are damaged by the image being fixed for a long time. Under such conditions, the phosphors lose their brightness and display only the color that they have repeatedly had to display.

All screens are likely to cause image burn problems

LCD and LED TVs are not immune to this problem, but they do get damaged in a different way, and they have a similar problem to previous-generation TVs, meaning that the longer the image stabilizes, the longer the effect of the image will remain on the screen forever.

Also on LCD and LED TVs this problem is referred to as image retention (the most common type of image burn), image persistence or LCD shading.

Image retention differs from image burn (although this problem occurs before the image burn phenomenon occurs). Let us give you an example to better understand this: imagine you want to draw a train, and this image should remain stable for a few hours, and after the painting is completed, you can watch or play a movie if you are careful when painting and playing.

Look at the display,

you can see the lines and the blurry image of the train; however, in most cases the images disappear for a short time and usually the image gradually disappears as the images move and colors change.

Of course, if LED or OLED TVs get burned, this problem cannot be solved at all, and this is because of how they work. Light emitting from LED TV lamps causes pixels to lose their performance over time.

When an image encompasses a number of pixels and remains stable for a long time, those pixels break down faster than the surrounding pixels, and there is no way to restore them if the pixels are fueled. Of course, with regular use of LED TVs, OLEDs, QLEDs , and other types of screens,

there’s no need to worry about that,

and the risk of image burns threatens your TV only when you watch a fixed network for a few hours each day; These networks are one of the main causes of the image burn phenomenon, as both the logo of the network remains on the image and it is possible to complete the captions for the subtitles on the screens.

and only the severity and type of problem varies across different displays.

The length of time that the image stabilizes causes damage to the pixels depends on the type of display, panel type, TV size, and manufacturer.

Solving the problem of image permanence is only possible on plasma and LCD TVs,

and there are several ways to do this. The effectiveness of these methods in solving this problem depends on the extent of the injury. Here are some possible ways to fix this problem; however,

before you create such a problem you can easily avoid this problem by using long images for a long time.

Also, if you don’t want to watch TV for 5 minutes or more, you might want to turn it off. This will also help extend the life of the TV.

Reduce the severity of the problem

Most displays are not properly calibrated, and this causes the image contrast and brightness to increase significantly. By reducing the amount of light and contrast of the TV or any other screen you can reduce the intensity of the image burn even with this problem. Less contrast gives more exposure to different parts of the screen. This makes certain parts of the display less bearable and in turn helps prevent image burns.

If your display is damaged, you can still hold a white image on your TV for 1 to 2 hours. Permanently switching between black and white with random patterns can help eliminate the ghost of the image. Unfortunately, this solution cannot fix the problem if the problem is severe. Some televisions have a functional capability to do this better. On TVs equipped with this technology, the screen hits the screen and the surface of the screen is filled with these random patterns.

Use Pixel Shift or Screen Shift

that slightly changes the image and pixels used. If your TV is equipped with this feature, you will need to refer to its settings to enable it. Pixel Shift is a simple and effective feature to avoid the irreversible image burn problem of LED and OLED TVs. This feature can also be useful to fix the LCD shadow problem. New televisions have screen refresh capabilities that can prevent image retention or image burn problems.

Use the JScreenFix tool to troubleshoot computer monitors

Using JScreenFix software is the best software to solve the image burn problem,

although it is actually designed to fix the burning pixel problem, but the new version of the software,

JScreenFix Delux, can also be used to fix the image burner and LCD TVs. Also increase. JScreenFix Delux is free, but if you want to use it for more than 5 minutes each time,

you have to pay $ 2 for software licenses.

If you’re not sure if your display pixels are burned,

you can use burned pixel recognition software like UDPixel (you need to install the Microsoft .NET Framework to use this software).

Of course, if you are not using Windows or are unwilling to use software,

and if you are using a Google Chrome browser,

click the circle icon or The lock icon next to the address bar and click on Settings,

find the Flash word in the Permissions section,

and select the Allow option from the drop-down menu next to it). You can test your display in black, white, red, green and blue on this website.

Using a white screen saver can also be a good way to fix the image burn,

since white can solve the problem of image burn,

but this solution is more suitable for resolving image complexity (although this may not solve the problem completely either). ,

But it slightly reduces its intensity and makes it intangible), but you can also try to fix the image burn problem.

If your TV has a burned out image and you have a laptop ,

you can connect your laptop to the TV with an HDMI cable and display the desktop on your TV and wait a few minutes to see if this solution can fix your problem.

Playing fast-moving videos in a wide variety of colors for a few minutes to half an hour can help fix the problem. This method is also suitable for troubleshooting phone and tablet screens.

Turning off the display

Sometimes shutting down the display for a few hours can fix the problem,

but we recommend keeping the display off for 2 hours if you wish. This method can also be useful for troubleshooting phone and tablet screens (we recommend turning off your phone’s display for at least an hour).

Use after sales service

If your display has a warranty or after-sales service,

you can seek professional help from qualified service providers to resolve this problem. In addition, some displays come with a replacement warranty on a healthy device.

To fix the problem of phone screens In addition to the methods outlined above,

you can also try apps in Google Play and AppStore to fix the issue. Among these applications are OLED Tools (to fix the image retention problem). If none of the solutions outlined above fixes your problem, you have no choice but to switch screens. on the type of display and the severity of the problem; Prevent the performance of the screen from crashing or slowing down.

Tags: How to fix image burn problem on different screens?