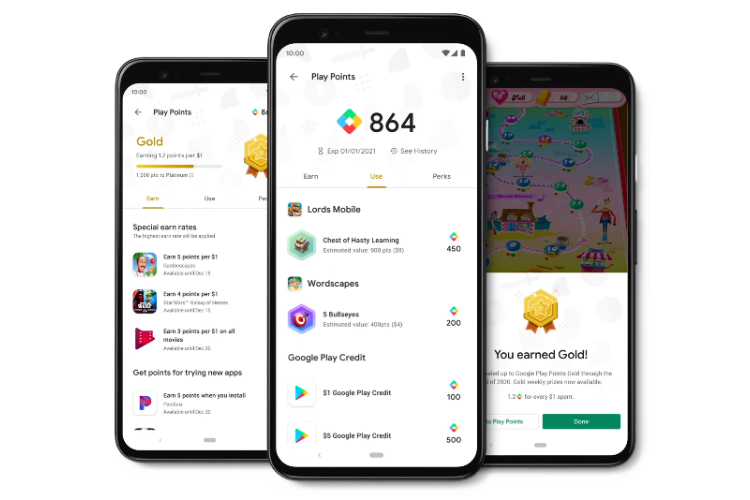 Google Play Points, an award-winning service for Android users at the Google Play store launched in Japan, has also recently been available in the US.

Yesterday Google officially announced the launch of a new Google Play Points service. Google Play points is actually a special service for Android users that can receive special rewards. Points can be collected through the Google Play Store . There are also several ways to earn points, and the user can spend points to receive multiple prizes.

GooglePoints first launched in Japan on September 2. Then, Google released the service to South Korean users in April. Google claims millions have already joined the Point service. The same issue has prompted the company to officially launch the Google Playpoint service in the United States.

Google has announced the launch of a new post in the US via its official blog post. The company says its new service is a special way that up to two billion Google Players across the world will be able to collect points. Google’s announcement indicates that the company plans to soon make the Point service widely available worldwide. Google Playpoint membership is completely free, and users are not required to pay for it. Once you have subscribed to the service, you will receive points whenever you buy on Google Play. In addition to downloading special apps and games available on Google Play, it will also increase user scores.

In addition, Google plans to host special events on a weekly basis that will allow users to receive high ratings.

Google Playpoints services a special token depending on users’ activity: bronze, silver, gold and platinum. The more points you get, the higher your account level and you will receive new badges. The higher the level of the account, the more special packages (such as weekly prizes) will be available to you. Through these tasks, Google intends to keep the user interacting with the Point Service.

The user can spend points he has received in different ways for specific purposes. It is worth noting that various things can be done through these privileges, such as getting special items in apps and games and buying audiobooks and movie rentals on Google Play.

To join the Google Play service , open the Google Play app on your smartphone and then go to the top right hamburger menu. Once the menu is open, tap the Play Points option to subscribe. Once you do this, a special bonus will be added to your account for each Google Play activity.

Google Play Points service is available to US users

The Google Play Points Reward Service, which was previously available to Korean and Japanese users, has just arrived in the US.

Google Play Points is the name of Google’s Reward Service, which allows Android users to collect PolyPoint by purchasing from the Play Store . Books, movies or in-app payments and Android games include these purchases. You can also get more bonus points by downloading different apps and games. Google also hosts weekly events that allow you to earn more points by buying books, movies and games. The item list has not been announced weekly, which is likely due to the rotation of items.

In the past the service was only available to Korean and Japanese users. However, according to the latest mobile game news , Google Play Points has also been revealed to US users. The following points out that by earning points, your subscription is divided into several levels, the lowest being bronze and the highest being platinum. The higher your level, you can also use specific jumps that give you weekly prizes.

Users can earn points by buying in-game items like Candy Crush and Pokemon Go. You can also buy Google Play discount codes and credits. The following shows that you earn one point for each dollar spent. Your points will be calculated by multiplying the odds by three points in the first week that you sign up for the service. In the end, it has not yet been announced when this service will be available to other countries.